Gardening Group Presentation on "Garden Looking after itself"

Our group of keen gardeners met for the Monthly Meeting at Stephen's house. He had promised to give a talk with the title above. Here are the details.....
As much as we enjoy gardening and there are many benefits other than somewhere attractive to look at and sit in, a garden which will partially look after itself is a bonus.
·        Which plants survive the best in a clay soil?
·        Are there any plants which tolerate infrequent watering?
·        Which plants are best for ground cover?
We all face the same problem in this area – clay soil which is too sticky in Spring and Autumn and like a rock in Summer. Here is a newspaper article provided by Jo with a few suggestions.


You can see the full worksheet notes HERE 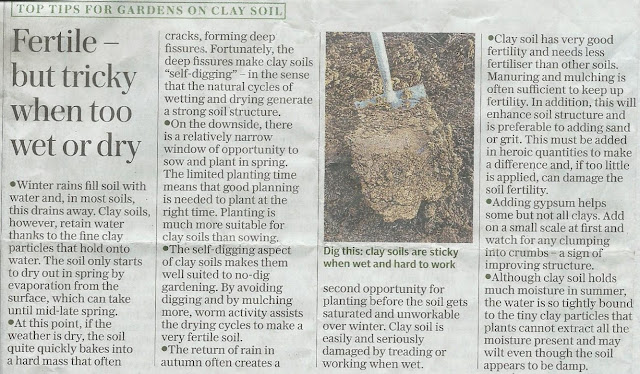 Key points:-
·        Sowing seed directly into clay is generally not too successful. This also applies to self-seeding plants.
·        Narrow window of opportunity for planting – Late Spring and early Autumn when soil is soft and not too wet.
·        Allow the worms to do the work. It’s probably better not to do too much digging. Mulching is better.
·        Clay soil is generally more fertile.
Mrs Gladstone says she achieved her lovely garden on clay by digging in coarse grit or pea shingle.
Here is what the RHS says about clay soil…….
When planting on heavy clay soil it is always advisable to attempt some improvement of the soil, by working in organic matter. Mulching the surface of the soil will also help improve the texture.
·        One of these materials is long manure (manure that still has a proportion of visible straw remaining) or composted bark
·        Finer grades of composted bark, leafmould, leaf litter, garden compost or mushroom compost will still have a beneficial effect, but to a lesser extent
·        Dig coarse grit into the soil profile is often recommended, but the quantity required to have a beneficial effect makes this an impractical solution on all but the smallest scale
·        When planting on clay soils, the bottom of the planting hole should be broken up before planting and the sides of the hole broken down using a garden fork. If not loosened, a sump may be formed in that water can collect, resulting in probable plant death from waterlogging
·        It is a good idea to delay planting on heavy clay soils until late winter or early spring, when there is less time for dormant roots to become waterlogged and cold
·        Mulch the base of the plants in spring with a 7.5cm (3in) layer of well-rotted organic matter which will help to retain moisture and suppress weed growth. Leave a gap of 7.5cm (3in) between the stems and the mulch to decrease the chance of rots developing at the base. Continually maintaining this mulch will gradually improve the soil profile
·        Freezing and thawing over winter of ground dug in October aids soil breakdown and helps to form spring seedbeds
So, have any of you had any success with the following?
Suitable plants for Clay
Shrubs
Berberis (evergreen and deciduous)Buddleia
Cotoneaster (evergreen and deciduous)Escallonia (evergreen)Fuchsia
Hydrangea
Mahonia
Rosa
Spiraea
Viburnum (deciduous and evergreen)Weigela
Ground-covering plants
Bergenia
Euonymus fortunei
Gaultheria procumbens  Geranium
Hypericum Juniperus communis
Lamium galeobdolonPersicaria affinis
Rubus pentalobusVinca major
Climbers and wall shrubs
Chaenomeles
Cotoneaster horizontalis
Forsythia suspensa
Escallonia
Hydrangea
Kerria japonica
Lonicera japonica,
Pyracantha
Rosa
Herbaceous perennials
Alchemilla mollis
Anemone
AsterAstrantia
Geranium
Helleborus
Hosta
Kniphofia
Sedum spectabile AGMSolidago
Here is what the RHS says about it……..
With some conditioning of the soil and careful watering, there is a considerable range of plants that can tolerate dry conditions once they are established.
Practical considerations
·        Plant any silver leaved, less hardy, sun lovers in April so they establish their roots well before winter arrives
·        Try to plant small specimens so that they get used to their growing environment gradually as they develop
·        Adding organic matter to the soil before planting can help to improve both water availability and drainage, but do not add fertilizer, as this can encourage too much lush growth which may flop in summer, require extra watering, and be affected by frost in the winter
·        Use mulches to retain moisture in the soil
Suitable plants
Many drought tolerant plants have silver or grey-green leaves, their light leaf colour reflecting the harsh rays of the sun. Some have a coating of fine hairs on their leaves or stems, helping to trap moisture around the plant tissues. Below is a selection of plants with good drought-tolerant properties.
This is a selective list. For full details of all drought resistant plants, please go to the RHS website  https://www.rhs.org.uk/advice/profile?PID=397
Small shrubs
Artemisia ‘Powis Castle’(2ft x 3ft)Halimium: Height and spread variable according to cultivarHebe: Height and spread variable according to cultivarLavandula (lavender): Height and spread variable according to cultivar
Ozothamnus ledifolius  (3ft x 3ft)