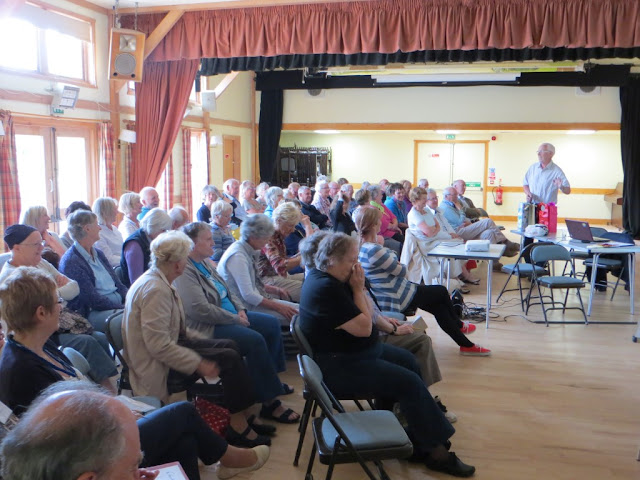 I'm sure that most of you reading this will be well aware who does this website. So for that reason, modesty does not allow me to write in my usual way about the monthly meeting so I will leave it to the words of others. After the formal meeting which every U3A must hold each year, we decided we would have a bit of fun to liven things up.

Before I tell you what happened, here are some reviews. The first two from members who were there on the day...

"Have to say, I have been to many an AGM but never had so much fun, and never recall laughing in any of them.  Well done and thank you. Can't wait till next year!!!!"

"That was the best AGM I've ever been to"

And from our outgoing Chairman, Molly Ward....

"A big thankyou for making the AGM such a resounding success. I know the members enjoyed your experimental method to prove that 'Death by PowerPoint' was not always true.....problem is what are we going to do next year?"

Well, thankyou for those comments. There were many more and they were much appreciated!

Our previous speaker, Chris Lloyd and his amazing coat of many pockets made it clear that he wasn't too keen on PowerPoint. As that was what the Committee had asked to prepare to let the members know about the groups available, I decided it had to be "With a Twist". I substituted his amazing coat for a Hi Viz Jacket, his tableau for a mini orchestra and his exciting talk with an interactive quiz. Volunteers had to perform and members had to join in. There was no escape and the laughter filled the hall. I'll let the photos speak for themselves.

The prize for the quiz was to be an Edenbridge U3A Gold Member with a certificate to prove it. In the end, despite the difficult tie breakers, six of our female members shared the prize and they are photographed here with Molly, our outgoing Chairman. I don't know what happened to the men! 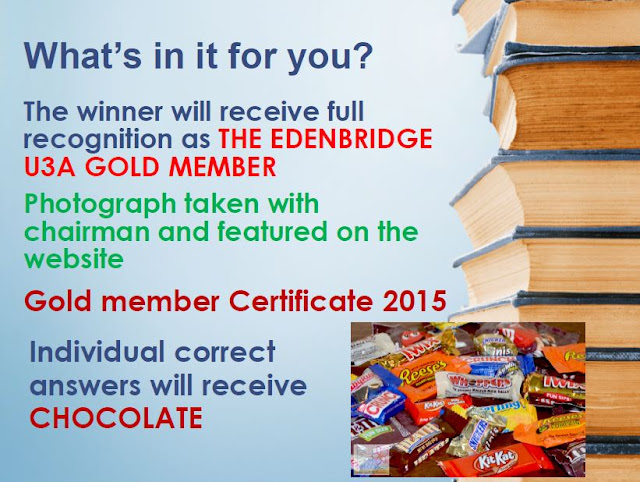 It was all a bit of fun and a great time was had by all!
Written by Stephen at 12:07